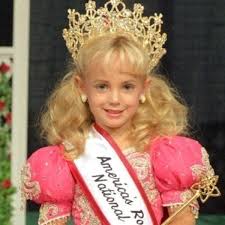 Waiting in line at the grocery store, you may have seen the face of this six-year-old beauty pageant queen on the cover of magazines. Jonbenet Ramsey was killed in her own home over twenty years ago, and the case is still unsolved. Tampered evidence, lack of immediate interviews, and many more mistakes are why this case still remains a mystery.

Late in the night of December 25, 1996 the Ramsey family had just gotten home to their 15 room mansion. Jonbenet’s parents, John and Patsy, claim that Jonbenet fell asleep in the car ride home from a family friend’s party that night. At 5:52 a.m., Patsy called the Boulder County Police Department frantically exclaiming that she had found a ransom note on the stairs going to the kitchen.

This three page ransom note, which was written in a notepad belonging to the Ramsey family, requested $118,000 in exchange for Jonbenet. $118,000 was near the exact amount that John Ramsey had just received as his Christmas bonus. The ransom note was signed S.B.T.C., and investigators still do not know what it stands for. Handwriting analysis tests showed that it could not be John, but they could not rule out Patsy for certain.

When investigating, police found no signs of forced entry or footprints in the snow. There was a broken window that led to the basement, but John said that it had been previously broken, and he did not worry about fixing it because they lived in a safe neighborhood. Since everyone waiting in the house was antsy, one police officer suggested that John and his friend go search the house for more clues. When arriving to the basement of their mansion, John found his lifeless daughter’s body on the ground. He immediately ripped the duct tape off Jonbenet’s mouth, wrapped her in a nearby blanket, and carried her upstairs to the living room where everyone remained.

This was a major fault in the investigation. Not only did this tamper with evidence, but it threw off the entire crime scene. When Jonbenet was found, she was strangled with a garrote, made from a paintbrush from Patsy’s hobby kit. Although later in the investigation, it was discovered that Jonbenet had been hit in the head with a blunt object and knocked unconscious anywhere from 45 minutes to two hours before being strangled. Her cause of death was determined to have ultimately been the strangulation.

Another item that was found was a bowl of pineapple, Jonbenet’s favorite snack, on the kitchen table. The bowl only had fingerprints from Burke, Jonbenet’s brother, and Patsy. Although, from autopsy reports, Jonbenet had undigested pineapple in her stomach. When examining her body, investigators found an unknown male’s DNA under Jonbenet’s fingernails and in her underwear. Although, there were no signs of sexual assault.

All the twists and turns in the evidence of this case have left investigators puzzled. A lot of people believe that Jonbenet’s parents killed her for one reason or another, but John and Patsy were exonerated of the crime due to a lack of evidence. Some people believe Burke, who was nine at the time of the crime, had some involvement in his sister’s death, but he has done some televised interviews. There are still many people of interest and theories remaining in this case.