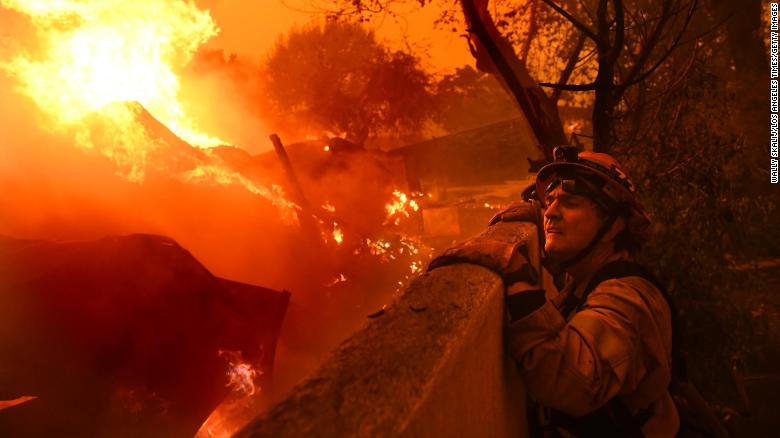 MALIBU, CALIFORNIA NOVEMBER 9, 2018-Mayor and firefighter Rick Mullen surveys a house that is on fire in Malibu as the Woolsey Fire comes down the hill Friday. (Wally Skalij/Los Angeles Times)

For the past week and a half, California has been engulfed by the flames of three major wildfires. The Camp Fire, Woolsey Fire, and Hill Fire have burned over 230,000 acres in the north and south areas of California. These fires have burned down towns, building structures, and even taken the lives of 63 people statewide and more than 600 people remain missing.

The Camp Fire, in the north, has made history as being the most destructive and deadliest fire in California. This wildfire alone has taken 61 lives and demolished over 8,800 structures. When looking at a cause for this fire, a new lawsuit has blamed a major utility company. It is claimed that Pacific Gas & Electric have failed to inspect and properly maintain their power lines. The Camp Fire is the least-contained fire at 35%, and officials do not expect it to be contained until  Sunday at the earliest.

These three fires have caused housing shortages, more than 9,600 firefighters to be working around the clock, viruses to break out in shelters, and many volunteers to risk their lives. These fires have affected people in many ways. People have died, gone missing, lost houses, evacuated with no knowledge of when they can come back. School is being cancelled because of poor air conditions, and people have to wear masks to go outside even hours away from the fires. Many celebrities and organizations have ways to donate, but thoughts and prayers are also appreciated.