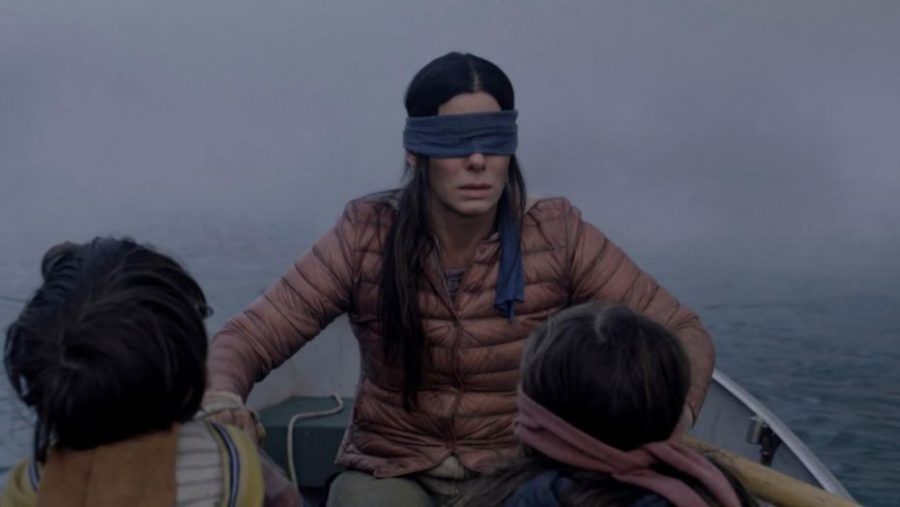 Whether you’ve actually seen the movie, heard about it from a friend, or seen posts of it scrolling through your feed, you’ve probably heard of Netflix’s hit film Bird Box. What you don’t know is it is based on a book of the same name written in 2014 by Josh Malerman. It accumulated 45 million views on its first week of being released making it Netflix’s most popular movie.

Bird Box’s basic plot is that a mysterious forces begins killing off the population. If you look at it you die, so characters have to cover their eyes with blindfolds. Before I watched Bird Box I had heard it being compared to A Quiet Place. Both of the movies have similar concepts only A Quiet Place’s monsters kill you if you make a noise. After watching Bird Box I can say that’s where the similarities end. Bird Box is more of a suspense/thriller while A Quiet Place is more of a true horror movie.

Overall, I thought the movie was good, but not as good as the hype made it up to be. My first complaint with the movie is its timeline. It jumps back and forth between present day and five years earlier. This gives the characters who end up dying away. It prevents you from wanting to know the other characters if they are going to end up dead. I also didn’t like how slow the movie moved. Some scenes seemed pointless as if just to make the screen time longer.

When you break it down three things made me like the movie: Sandra Bullock, the concept, and the ending. Sandra Bullock, as expected, did a great job of portraying the role of a distressed mom trying to protect her kids while also not getting attached. The concept stands out to me the most and I believe this is what got so many people to watch it. You get put into a story where opening your eyes could lead to death, and you watch characters come up with ways to travel outside without having their eyes to guide them. Although some might say the ending was lackluster, I believed it gave the story a good ending while bringing the story full circle. It brought back to one of Malorie’s biggest fears before the mysterious force came into play.

Would I recommend you watch it? Yes. While some parts do move slow and seem unnecessary, when I look back at the movie as a whole I am glad I watched it for the story and good acting.