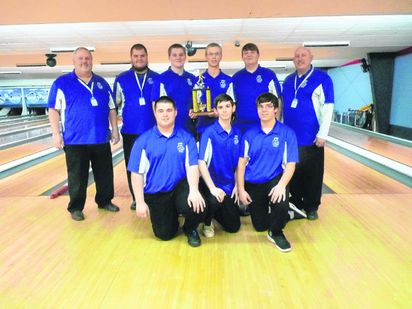 The Seymour Varsity boys bowling team makes history this year with a remarkable season. They are coached by Shannon Kelly and their assistant coach is Toby Lawson. Shannon Kelly is in his 10th year of coaching.

Going into the last match of the season, the varsity boys were tied with Columbus North for the conference championship before winning the match in a tiebreaker with total pins 1157 to 1753. The Owl’s finished the season with a record of 12-2 and advanced to Sectionals. Sectionals were being at Columbus bowling center on Saturday and the owls came out strong. Five of their baker games came out with a score above 200, with the highest being 257. With Columbus and Madison both coming with strong baker games of their own, Columbus was able to hold off Madison to face Seymour in the finals of which determined the champion.

In the final round Seymour topped off Columbus with 420 pins, to Columbus’s 307 pins, and was able to claim the Sectional title. The single rounds began after team rounds, with Sides winning fifth, Hayes winning fourth, Cooper third, and than Lanam second. The Regional match the following weekend was at New Castle Signature lanes. At the Regional match, Colton Haynes was crowned singles champion, with the team claiming the final spot for state by obtaining fourth place.

At the first ever state meet for the Seymour Varsity Boys Bowling team, the boys placed 10th with a finishing score of 2,050. Ben Davis ended up winning the State Championship with a score of 392. In an interview with senior Colton Haynes, he said, “This year was great being my last year. I was expecting to win semi-state, but I never would of thought of making it to state but that is just what happens when you have a good team and a great coach.” The varsity boys team includes: Trevor Lawson, Andre Sides, Colton Haynes, Luke Lanam, Kenny Kelly, and Trey Morris.