This Year’s Musical, The Addams Family 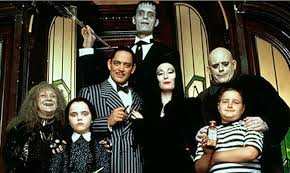 I had the pleasure of interviewing Mr. Karum of the musical department about this year’s musical, The Addams Family, set to premiere April 4, 2019.

Tell us a little more about the musical.

The story line centers around the traditional Addams Family characters we all know, Gomez, Marticia, Wednesday, all those characters, but it also introduces three more characters called the Beinekes. They are Mal, Alice, and their son Lucas. Lucas is the love interest of Wednesday and the whole story centers around their love for each other and their plans for the future.

Who have you cast as the lead roles?

How can Varsity Chorale use this as a learning experience?

This is a great learning experience for them because they’re putting in an effort to put on a fully staged production. This is a big production we’re putting on and it’s got a lot of moving parts, and it takes a lot of people. One big thing is that it puts an onus on them to really have their parts down, have their dance numbers down, have their songs down, and to really work collaboratively on this effort to provide a good performance for this community.

How much time and effort goes into making the musical to get the result you want?

A long time in short. But a little more in depth, we start the process for the musical actually in the fall. We do auditions and we do some dance workshops to brush up on those skills. We audition at the end of the fall for the characters and I post the character list before we leave for winter break, so that way they get their scripts before winter break and they can study them over the two weeks. And then when we come back it’s rehearsal everyday non-stop and then sometimes needed we’ll do before school and after school.

What type of audience is this geared to?

What should the audience expect?

When will the musical premiere?

We do our official open on April 4 at seven o’clock and then we have two more evening performances after that, April 5 and 6 at 7. We are also doing this year, a full matinee at one o’clock.

I also had the opportunity of asking Mr. Cottrill some questions as well. Here are his responses:

Why have you selected The Addams Family as this year’s performance?  Mr. Karum selects the musicals at SHS because he knows his students best.  We talk about certain shows and how they might fit with the students that we have in a particular year.  But, the final decision is his.
What are your goals for the musical?  We want to present an excellent product that is well rehearsed, prepared and performed.  As the pit orchestra director, I want the music to be played with great beauty, style and intonation.  When a student actor sings or speaks in a scene, the pit orchestra should add to the final the beauty of the performance and not subtract from it.
What is it that makes the musical so special year in and year out?  We have a great (over 50 year) tradition at SHS of putting on great musicals.  It’s not just the choral department and not just the band department. Together, the music department puts on a great show together for the school and community.  To be completely honest, it’s one of the greatest collaborations in the entire school corporation year. And, it happens annually at SHS.
What are some challenges you may face during practices and rehearsals?  We don’t have a built in pit area in our auditorium. So, we have to make a place for the pit and it is usually very hard to choreograph/synch together.  There are a lot of moving parts with music, lines, songs, costumes, dancing, acting, props, scene changes , etc. The pit orchestra has to blend everything together musically.  With our auditorium, we are at a great disadvantage. But, we do our best and it usually works pretty well! Also, pit orchestra isn’t a class, so we have to do all of our rehearsal and preparation before school.  The week of the show asks the students to put in really long hours usually until 10 p.m. All this for no pay or reimbursement.
How might the audience be surprised by the production? I think the audience will really like the show because it’s funny, really dark and well paced.  The students who are playing lead roles will be quite good and are good musicians. In fact, many have a background in band like Harrison Cottrill, Sam Schmidt, and Leah Desender.  I’m excited for the audience.
How long have you worked on/for the musical and/or drama club?  We usually start the pit orchestra part of the musical in mid January.  We rehearse from 7:30-8:25 a.m. on Tuesday and Thursday until Tech week which is one week before the show.  Show week is very long hours but we all work hard to present the best possible musical product to the community.
How do you join the drama club?  The drama club is Mr. Stangland’s department.  It really has little or nothing to do with the musical.
How do you decide lead roles for the play?  Mr. Karum, Mrs. Shutters, and I will listen to student auditions.  All students who want a lead have equal chance. It comes down to hard work, musicianship, vocal quality, and ability to act.  Leads are decided well in advance of a show from live auditions. (like 3-4 months in advance)
What are the requirements to join the drama club? Again, this is Mr. Stangland’s area.  If you want to be in the Musical you have to successfully audition for Varsity Chorale.  Mr. Karum controls this.
Does the school fund the theatre productions or do you require donations/sales?  We are funded a little bit but mostly the choral department has to fundraise to put on these “high priced” musicals.  They are quite expensive to retain the rights to perform. We’ll take all the donations that we can get!

Tickets are available here. They are $7 in advance or $9 at the door.