The story behind Annabelle 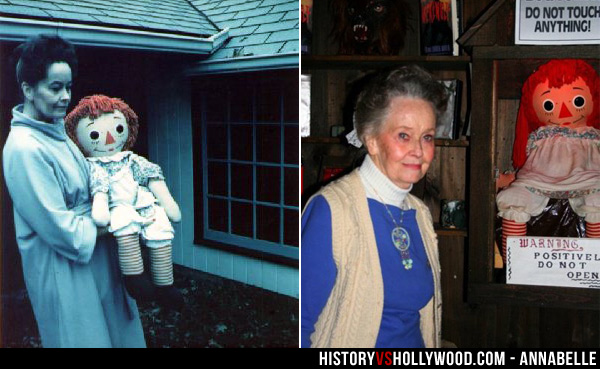 In 1970, a mother purchased a Raggedy Ann doll from a hobby store as a birthday present for her daughter Donna. Donna was a soon to be graduate from college with a nursing degree. While she was preparing for graduation, she lived in a tiny apartment with her roommate Angie. When she got home from being with her mom, she put her birthday present on her bed as a decoration and didn’t give it another thought.

Within just a few days, both of the girls noticed there was something strange about the doll. At first, it would be just subtle things such as a moving of position, but as days went on, the movements became more noticeable. When the girls would come home from work, they would find the doll in other rooms they didn’t leave her in. They would find her with her arms and legs crossed, and sometimes even standing on her feet. On multiple occasions, Donna left the doll on the couch, but would return home to find it on her bed, in her room, with the door closed.

After about a month of having the doll, a new quality was added to the doll. It began to leave notes for Donna and Angie to find. The notes would be written as such, “Help us” or “Help Lou”. The handwriting was similar to a small child’s. The weirdest part about this was the notes were left on parchment paper, but the girls never kept any parchment paper in the house, so where did the doll get it?

Lou was friends with Donna and Angie and had been with them since the doll arrived. He never liked the doll and warned Donna that this doll was evil and to get rid of it as soon as possible. Donna had a compassionate love for the doll and kept it against Lou’s wishes. This decision would be the worst decision of Donna’s life.

One night when Donna returned home from work she noticed the doll was moved again. This was a normal part of their routine, but this time it felt different. She inspected the doll and found blood drops on the back of its hand and chest. After this altercation, Donna and Angie decided it was time to receive expert help.

Not knowing where to begin they connected with a medium and held a seance. During this, the girls were introduced to the spirit of Annabelle Higgins. The medium then told Donna and and Angie her story.

Annabelle felt comfort with Donna and Angie and she wanted to stay with them and feel their love. Donna felt bad for Annabelle, so she gave her permission to inhabit the doll and stay with them. They would soon find out that Annabelle was not the girl she appeared to be.

Lou awoke from a deep sleep in a panic. He had the same reoccurring nightmare, only this time, something was different. It seemed as though he had sleep paralysis. He looked around the room trying to make sense of what was happening. When he looked down at his feet, he saw Annabelle. Slowly, Annabelle crawled up his legs and stopped when she reached his chest. Within seconds of reaching his chest the doll began to strangle him. Paralyzed and gasping for breath, he eventually reached asphyxiation (the state of being deprived of oxygen) and blacked out. Lou woke up the next day certain what happened was not a dream, but reality. He was determined to rid of the spirit possessed doll.

Preparing for a road trip the next day, Angie and Lou were alone in the apartment going through maps. Suddenly interrupting the quiet was a rustling sound that came from Donna’s room as if someone was breaking in. Lou wanted to know what was going on so he quietly walked to Donna’s room. He waited by the door for the noises to stop before he entered. The room was empty except for Annabelle who was lying face down on the floor in the corner.

Lou scourged the room to see there was a sign of forced entry or if anything was stolen. When he got close to the doll he got a feeling as if someone was behind him. He turned around to see if someone was there, but there was nothing behind him. In a split of a second, he grabbed at his chest and doubled over. He was cut and bleeding. His shirt quickly stained of blood and upon investigation he noticed what looked to be seven claw marks upon his chest. Three of the scratches were vertical and four were horizontal. Half of the scratches healed immediately, then the other half within the next two days.

Donna finally began to believe that the spirit in the doll was not an innocent young girl, but a demonic and inhuman spirit. After what happened to Lou, she felt as though it was time to get real expert advice. She then contacted Father Hegan. He felt as though this situation needed someone higher up in the church so he then called on Father Cooke who then immediately called the Warrens.

Ed and Lorraine Warren immediately were interested in the case and contacted Donna to get more information on the doll. After speaking with Donna, Angie, and Lou, the Warrens determined that the doll was not possessed, but was manipulated by an inhuman presence.

Spirits do not possess inanimate objects such as toys or houses, they possess people. An inhuman spirit can attach itself to a place or object like in the Annabelle instance. The spirit attached itself to the doll and created an illusion that it was alive in order to get noticed and create an attachment. It was not wanting to stay attached to the doll, the spirit was looking for a human host to live in.

In this specific case, the inhuman demonic spirit was at the infestation stage of the possession. It first began by moving the doll around with teleportation to make the possible human hosts interested in the doll and this bizarre phenomenon. The spirit predicted that Donna would make the mistake by bringing a medium to communicate with the spirit. By communicating through the medium, the spirit began to have the ability to prey on the vulnerable girls emotionally acting as though it was innocent and harmless, during this seance, Donna gave the spirit permission to haunt the apartment. Being the demonic inhuman spirit it was, it was determined to cause negative phenomenons. It caused fear by causing the doll to move, the notes, the blood drops on the doll, and attacking Lou. If they had waited another two to three weeks, the possession would have advanced to possession of a human host possibly causing murder.

After retrieving Annabelle, the Warrens felt it was appropriate to have a blessing be bestowed upon the apartment. Father Cooke came to give the blessing which consisted of an Episcopal blessing. Ed Warren explains an Episcopal blessing by stating, “An Episcopal blessing of the home is a wordy, seven page document that is distinctly positive in nature. Rather than specifically expelling evil entities from the dwelling, the emphasis is instead directed toward filling the home with the power of the positive and of God.”

The Warrens took Annabelle with them after leaving the apartment. Ed put it in the backseat and did not take an interstate in fear that the spirit was still intact with the doll. The suspicions about the spirit were correct. At each stop or turn, the car would swerve and stall , and the breaks would fail. After multiple disturbances, Ed got into his black bag, pulled out a vial of holy water, and poured it on the doll while making the sign of the cross. There was no longer any swerving or stalling, and the brakes went back to normal. The Warrens arrived home safely.

After arriving home, Ed left the doll on his desk. Repeatedly, the doll levitated and fell back down. Within the next few weeks of having the doll, the doll began to show up in random rooms of the house. When the Warrens would leave the house, the would lock the doll up in the outer office building but would return to find the doll in Ed’s chair sitting like it was left there as decoration.

Another instance where Annabelle was evil was when Lorraine brought an exorcist named Father Jason Bradford. When he saw the doll he said, “You’re just a rag doll Annabelle, you can’t hurt anyone!” Lorraine warned him not to be mean to the doll. When he was getting ready to leave Lorraine begged him to be careful when driving and to call her when he got home. A few hours later Lorraine received a called from Father Jason where he stated he was in a car accident. He explained that he entered a busy intersection and his brakes failed. There would be other occurrences such as this one within the following years.

The Warrens had a special case built for the doll and displayed it at the Occult Museum. Since being put in this case, Annabelle has not moved, but she is still believed to cause deaths. A specific case is a young man who rode a motorcycle. He made fun of the doll and challenged the powers of the spirit, He told the doll to mark him like it did Lou if it was real. Ed immediately told the man to leave the building. On his way home, he continued to make fun of the doll with his girlfriend. While doing this he lost control of the motorcycle and hit a tree. He died on contact. Since that day, Ed continued to warn people about not challenging evil and no man is more powerful than Satan.