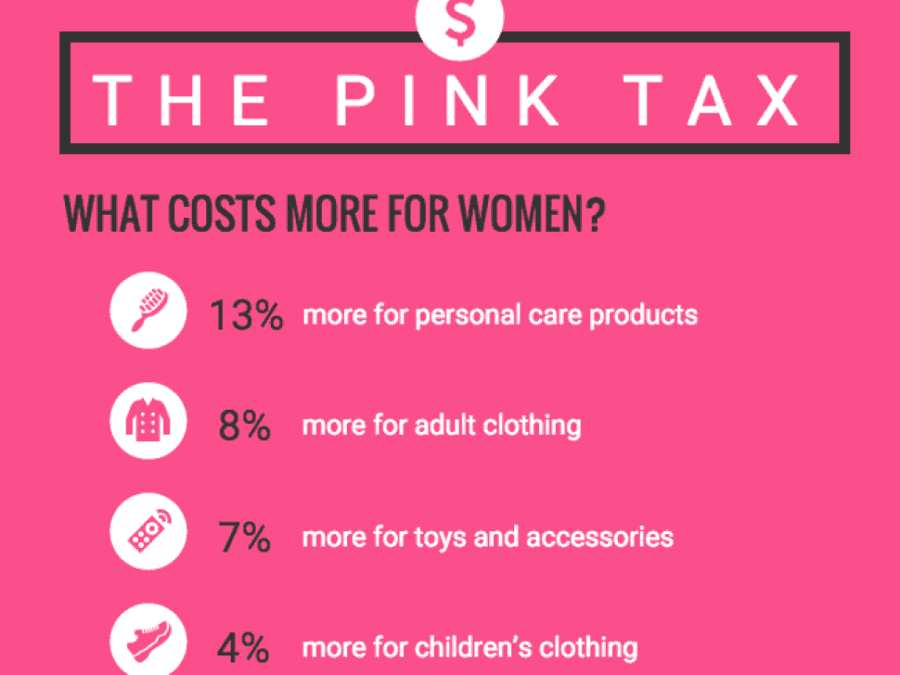 The pink tax is a phenomenon often attributed as a form of gender-based price discrimination, with the name stemming from the observation that many of the affected products are pink. Pink products are products that relate to the female gender such as: tampons, pads, dry cleaning, and vehicle maintenance. These are just a few of these items that get pink taxed. Meanwhile, out of the fifty states, five do not have a state sales tax (Alaska, Delaware, Montana, New Hampshire, and Oregon.) Only 10 states out of the 50 exempted hygiene products (Connecticut, Florida, Illinois, Maryland, Massachusetts, Minnesota, New Jersey, New York, Nevada, and Pennsylvania.)

People will argue that dry cleaning and vehicle maintenance can also be purchased by men. While this is true, women are charged with a higher price tag. How can they do this? When dropping off items such as dresses, women’s dress shirts, women’s dress pants, and other women’s clothing, dry cleaners will charge more for these items than they would for a men’s dress shirt because they are “harder” to clean.

The real question, “How can women get charged more for vehicle maintenance?” Simply because they are women. Northwestern did a study to see if this was true. A woman called a repair shop and acted clueless about about having a radiator repair job done. She got quoted $406. A man called the same repair shop for the same repair and was quoted $383. The radiator repair job should have only costs $365. Even though both genders got cheated out on money, women get cheated out much more than men do. On average, women pay 42% more than men most of the time. With things such as the pink tax, women spend $1,351 that cannot go into the retirement fund.

Pads and tampons have a sales tax on them because they are considered luxury items. Some women cannot afford to buy a box of tampons let alone pay the sales tax. These are not luxury items. These are the necessities for women. Condoms on the other hand, are not considered luxury items and are therefore tax exempt in certain states. Condoms are also given out for free at certain businesses such as Planned Parenthood, but pads and tampons are harder to get a hold of. Even though it is easier to stay abstinent and refrain from sex than it is to refrain from having a period, condoms are not luxury items. On average women pay 13% more for personal care products than men.

The pink tax is not just for adults. It starts at birth. Girl’s toys on average cost 13% more than the boy toys do. For example, at Target there are two options for a bike. One is pink and one is not. The pink bike will cost $80 while the non-pink bike will cost only $64.

The pink tax can be removed, but it most likely will take years before anything will be done. There have been many petitions to remove taxes from female hygiene products, but it just hasn’t happened yet. Hopefully sometime in the near future it will.