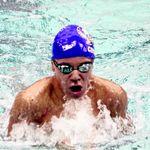 Article by Arv Koontz The Tribune

Eduardo Zarate, a senior on the Seymour boys swimming and diving team, says it seems like the season has sailed right along this winter.

“I think the thing I enjoy the most about swimming is the team,” he said. “There is nothing that compares with the team. We’re just one big family. That’s one thing that has brought me back to swimming, the connection you get with your teammates. As long as we’re a team, there is nothing that can break us down.”

The Owls ended 12-3 in dual meets, and this marks the 28th consecutive year the boys have had a winning season.

“It was a fun meet,” coach Dave Boggs said. “It was their last dual meet. We let them sign up for what (events) they wanted to for the most part. For a couple, we selected what they swam so we could get some times on them. This was the last chance at finding some surprises perhaps.”

Zarate is one of the two seniors on the team.

“I’ve [swum] all four years in high school. This is my 11th year swimming. I’ve been swimming for a while now,” he said.

His main events have been the medley relay, 50 freestyle and 100 butterfly.

Zarate said when he and Bryce Miller were freshmen, there were six or seven in that class on the team. They are the only two that have [swum] all four years for Seymour.

Zarate said being a senior is bittersweet.

“I’m definitely sad that this is my last year swimming because so many memories have been made at this pool, good times, hard times, but on the bright side, I’m one step closer to figuring this world out,” he said.

Sophomore Paul Montgomery is the fifth member of his family to swim for the Owls.

He said he has had three older brothers and a sister swim for Seymour.

“A couple of them are on the (Seymour) record board,” he said. “Swimming is something our family has done, and it’s a fun thing. I enjoy being in swimming. I’ve done the club swimming. It’s a big change between swimming outdoors in the summer and high school swimming.”

Montgomery said it definitely feels as if the season has gone fast.

“I can’t believe we’re finally doing taper and settling down and swimming easier sets and getting ready for sectional,” he said.

Montgomery said with the taper, he is definitely able to swim faster.

“You really feel it at the end. The entire season is building up to it so we can perform our best at the sectional,” he said.

Montgomery said his favorite event is the 100 freestyle.

“I’m actually in the (400 free) relay,” he said. “I’m hoping we can go to state. The taper is all about perfecting the little things. It has been a great year.”

Ethan Myers was Trinity’s only swimmer. He placed fourth in the 500 freestyle and fifth in the 50 free.

Boggs said in preparation for the sectional, his swimmers “need to continue resting, continue polishing up details and making sure their heads are in the right mode come sectionals and have all this hard work paid off.”