Indiana and Basketball: A Love Story 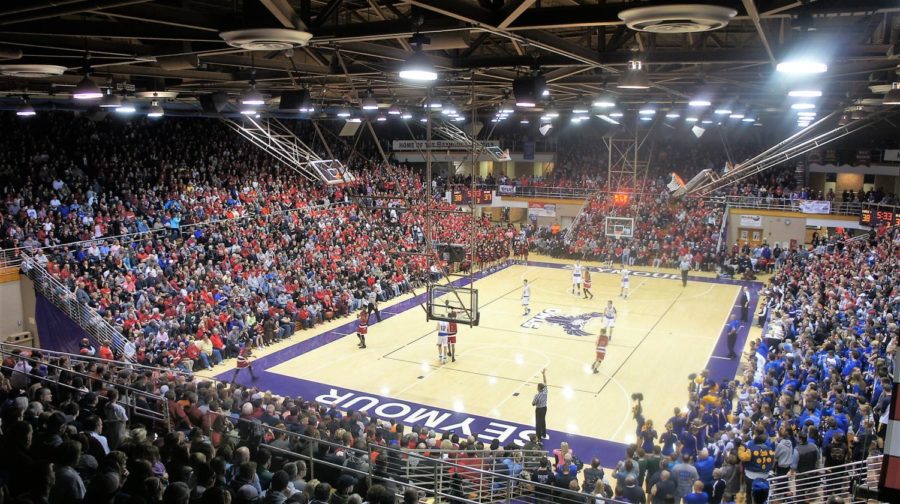 Certain things just seem to fit together: peanut butter and jelly, ham and cheese, Tom and Jerry, Jordan and Pippen. Arguably the most dynamic duo, however, is that of the state of Indiana and basketball.

Since the early 20th century, Indiana has become synonymous with basketball at all levels. From the NBA down to elementary school, Hoosiers boast a deep tradition of producing high level hoops. The small Midwestern state is respected across the nation for its strong basketball roots, demonstrated by the NCAA’s decision to host its annual March Madness tournament at Indiana venues only.

Love for the sport is often instilled in athletes at a young age. For example, many Hoosiers’ basketball careers start around the age of six and continue through high school, possibly even college or the NBA. Of the many tiers of basketball in the Hoosier state, high school hoops is where Indiana separates itself from the rest.

Generally, the term “March Madness” is associated with the NCAA tournament, but Indiana has a pretty impressive end of season tournament of its own. Its 400+ teams are divided among four classes, with each school placed in a class depending on its student population. The biggest schools play in class 4A, while the smallest compete in class A. Each class has its own tournament bracket that concludes at Bankers Life Fieldhouse, yielding 4 state champions after the season’s final weekend in early April.

Another unique aspect of Indiana’s state tournament is its host sites. The Hoosier state is home to 9 nine of the nation’s 10 largest high school gymnasiums. The biggest of these is located in a small, southern Indiana town called Seymour. Lloyd E. Scott Gymnasium, home of the Seymour Owls, boasts an impressive seating capacity of 8,228 fans and hosts sectional, regional, and semistate. Unfortunately, this year the capacity was reduced to 50%, due to COVID protocol. Other notable gyms include John A. Baratto Athletic Center, New Castle Fieldhouse, and Tiernan Center.

Due to the overwhelming number of games and events throughout the season, it has become a necessity for basketball fans to have resources that allow for a more in-depth understanding of match-ups around the state. John Harrell’s Indiana basketball website (http://www.johnharrell.net/) is ideal for this very purpose. The site offers a plethora of statistics and information on every team across the state, both boys and girls.

One typical, yet crucial, aspect of a sports website is its ability to deliver scores in a timely, orderly fashion, something that Harrell’s site executes to perfection. Its “Gameday Scores” tab displays results neatly and effectively.

A short scroll will take the user to a tab labeled “Team Schedules, Scores,” a page containing links to every team statewide. The team pages offer a complete schedule, record, offensive and defensive averages, and a link to their state tournament history.

Possibly the most unique facet of the site is its predictions. For every game around the state, a score prediction is made based on factors such as previous results, offensive and defensive averages, Sagarin ratings, etc. Other features of the website include a coaches poll, conference standings, statistical leaders, tournament odds, tournament history, and more.